What are X-rays, and how do they work? 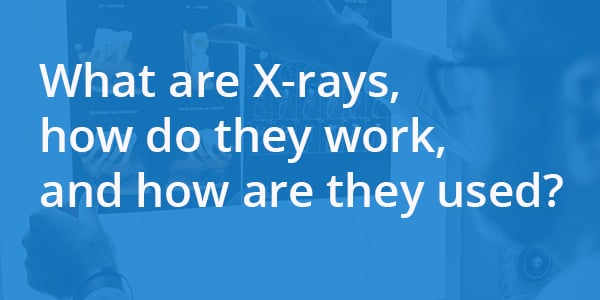 How do X-ray machines help protect you and your property?

We all know that X-rays let us see through materials to view the contents of a bag, or even into the body, but here we have a few facts about x-rays to understand exactly how they came about, what they are, and how they work.

What is an X-ray?

When were X-rays discovered?

X-rays were discovered in 1895 by Professor Wilhelm Conrad Roentgen at Wuerzburg University in Germany. While working with a cathode-ray tube in his laboratory, he noticed a fluorescent glow of crystals on a table near the tube, that tube consisted of a glass bulb with positive and negative electrodes inside in it. When a high voltage was applied, the tube produced a fluorescent glow, and when Roentgen shielded the tube with heavy black paper, he saw that a green coloured fluorescent light was generated by a material located a few feet away from the tube.

He concluded that this strange new ray was capable of passing through the heavy paper covering and causing the phosphorescent materials in the room to glow. He then carried out more experiments with his new mysterious rays and found that they could pass through most substances, casting shadows of solid objects.

When was the first X-ray used?

It didn’t take long for his discovery to find a use, and in June 1896, only six months after Roentgen announced his discovery, X-rays were being used in the battlefield to locate bullets in wounded soldiers. The use of X-rays remained within medicine and dentistry until 1912, but this changed with the introduction of high vacuum tubes which allowed for extremely high voltages without failing. With these new tubes and greater power, the X-ray was able to move into industrial use.

How do they work?

Today’s X-ray machines are a lot more technologically advanced, largely due to our understanding of how X-rays work. These machines produce a stream of electromagnetic radiation, and this interacts with an anode in an X-ray tube, the rays produced by this interaction are directed at the object to be examined. Modern X-rays machines are made in a way that means much lower amounts of radiation can be used and focused to get the best results.

There is an image receptor that detects the level of X-rays that hit it, and that amount depends upon the density of the object in the way. Heavier, more dense materials such as metal objects will appear darker, while clothing and other luggage contents will appear lighter. Most modern X-ray machines are even equipped to display in colours that differentiate between organic and inorganic matter, with items composed of wood, water, plastic, and textiles coloured orange, while metals displaying in shades of blue. Any overlap would show up as green, such as tennis balls in a metal container tube, and these images can be used to determine if the contents of packages are prohibited.

How safe are X-ray machines?

The X-ray machines you see at airports for body scanning work by directing low-dose X-ray radiation at passengers as they pass between two box detectors. The image is then produced on a nearby computer to reveal any hidden weapons that may be concealed in clothing, or even hidden inside a person’s body.

The idea of being bombarded with X-rays may sound alarming, especially when you’ve seen the measures taken to protect those in the medical profession when taking images of teeth or broken bones. The key to these airport scanners is the term ‘low-dose’, as the level of exposure is many times lower than used in medical X-ray machines at only about .15 uSv, or unit of radiation. In fact, the amount of radiation a passenger is exposed to during this scanning is less than they experience in flight from naturally occurring radiation.

You may be wondering if your electronic devices are safe while being scanned, well the simple answer is – yes! You have nothing to worry about when you pass your items through an X-ray machine at baggage check, and the only reason you may be asked to remove laptops and phones from bags at these checkpoints is that the dense material they are made from can obscure other items from being seen properly while being examined.

The only thing you may wish to remove from being scanned is any film for your camera, as the X-rays can pass through their packaging and partially expose the film, although this is only really possible for very high-speed film.

What materials can X-rays not see through?

Any material can prevent x-rays from penetrating beyond them if they are thick or layered enough, but in most cases, the materials that cause security checks to stop and look twice are metals. We all know that lead stops X-rays from getting through, from your experience at the dentist, to scenes of Superman failing to see into lead-lined boxes, but any metal can cause you to be spot-checked if it obscures the visibility of the contents of your luggage. In most cases, the security staff will be able to see well enough to recognise the normal holiday items, and they are well trained to know the difference between a hairdryer and a handgun.

How are they used to scan vehicles and containers?

The traditional X-ray scanning you pass fairly small objects through a tunnel and view the contents on a screen, but for much larger objects such as a vehicle how do you efficiently scan those contents, especially in the high volumes you expect at docks or transport checkpoints? The answer is large container scanning. These x-ray machines penetrate deeper than conventional scanning to allow the examination inside vehicles and containers to give the security staff more information about the nature of the cargo.

Typically for a port or border crossing this would work by having a truck pull up to a scanning station that resembles something like a large automatic car wash. The driver leaves the vehicle and the scanning of the truck can begin.

On one side the scanner moves along the side of the truck while on the other, the detector records the x-rays that pass through, revealing the contents on a screen. The scanning devices can even be mounted on a truck or inside a van to be mobile enough to pull up to the vehicle to be inspected. The whole process can be completed in as little as 30 seconds, and with the number of vehicles and cargo containers can go into the thousands, this speed is essential.

Ports and borders are busy, crowded places and the swift movement of goods between these lines is vital to keep the flow of commerce moving, and much-needed goods moving to their destination.

Twofold Ltd supplies and maintains security equipment, including X-ray machines and metal detectors, these are used to monitor incoming post and packages at events, businesses, schools, and airports. We also supply more specialist x-ray machines for full body scanning, and cargo scanning equipment, some of which can be mounted in a van, for mobile scanning of transported goods.

Twofold Ltd assists businesses to overcome these challenges with our range of mailroom and data solutions. From security equipment, scanning and capture, to document management and full digital transformation, contact us via the form here, or give the team a call on 0118 951 9800.

Previous Is your electoral department ready for postal votes in 2021?
Next How a digital mailroom strategy can transform your organisation

The 5 Myths of a Digital Mailroom

Is your electoral department ready for postal votes in 2021?